This is the source for the DigitalOcean guide How To Migrate a Parse App to Parse Server on Ubuntu 14.04, by Brennen Bearnes. It's best read there, with comments.

Parse is a Mobile Backend as a Service platform, owned by Facebook since 2013. In January of 2016, Parse announced that its hosted services would shut down completely on January 28, 2017.

Fortunately, Parse has also released an open source API server, compatible with the hosted service's API, called Parse Server. Parse Server is under active development, and seems likely to attract a large developer community. It can be be deployed to a range of environments running Node.js and MongoDB.

This guide focuses on migrating a pre-existing Parse application to a standalone instance of Parse Server running on Ubuntu 14.04. It uses TLS/SSL encryption for all connections, using a certificate provided by Let's Encrypt, a new Certificate Authority which offers free certificates. It includes a few details specific to DigitalOcean and Ubuntu 14.04, but should be broadly applicable to systems running recent Debian-derived GNU/Linux distributions.

Let's Encrypt is a new Certificate Authority that provides an easy way to obtain free TLS/SSL certificates. Because a certificate is necessary to secure both the migration of data to MongoDB and your Parse Server API endpoint, we'll begin by retrieving one with the letsencrypt client.

Next, clone the letsencrypt repository from GitHub to /opt/letsencrypt. The /opt/ directory is a standard location for software that's not installed from the distribution's official package repositories: 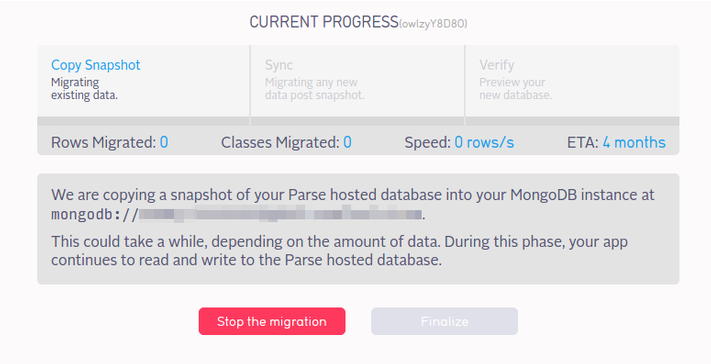 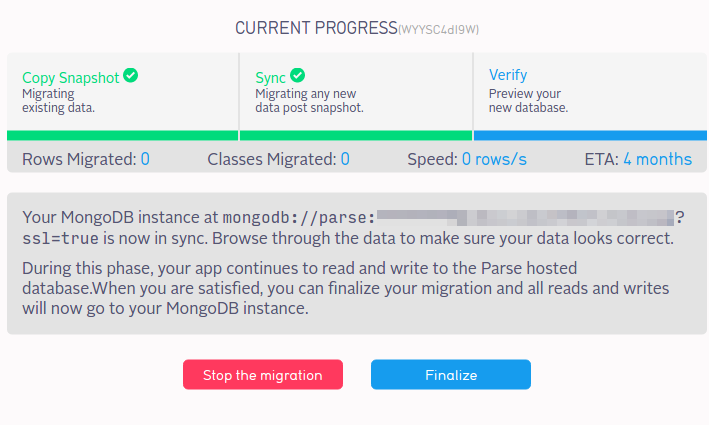 Return to your mongo shell, and examine your local database. Begin by accessing <^>database_name<^> and examining the collections it contains:

With your app data in MongoDB, we can move on to installing Parse Server itself, and integrating with the rest of the system. We'll give Parse Server a dedicated user, and use a utility called PM2 to configure it and ensure that it's always running.

Now, use the su command to become the parse user:

For testing purposes, you can paste the following:

Alternatively, you can migrate any cloud code defined for your application by copying it from the Cloud Code section of your app's settings on the Parse Dashboard.

PM2 is a feature-rich process manager, popular with Node.js developers. We'll use the pm2 utility to configure our parse-server instance and keep it running over the long term.

Now, run the script with pm2:

The list of processes pm2 is running for the parse user should now be stored in /home/parse/.pm2.

Now we need to make sure the parse-wrapper process we defined earlier in ecosystem.json is restored each time the server is restarted. Fortunately, pm2 can generate and install a script on its own.

Tell pm2 to install initialization scripts for Ubuntu, to be run as the parse user, using /home/parse as its home directory:

It should now be possible to test reads, writes, and cloud code execution using curl.

A simple POST with no real data to https://<^>your_domain_name<^>/parse/functions/hello will run the hello() function defined in /home/parse/cloud/main.js:

If you have instead migrated your own custom cloud code, you can test with a known function from main.js.

Step 6 – Configure Your App for Parse Server and Finalize Migration

Your next step will be to change your client application itself to use the Parse Server API endpoint. Consult the official documentation on using Parse SDKs with Parse Server. You will need the latest version of the SDK for your platform. As with the curl-based tests above, use this string for the server URL:

Return to the Parse dashboard in your browser and the Migration tab: 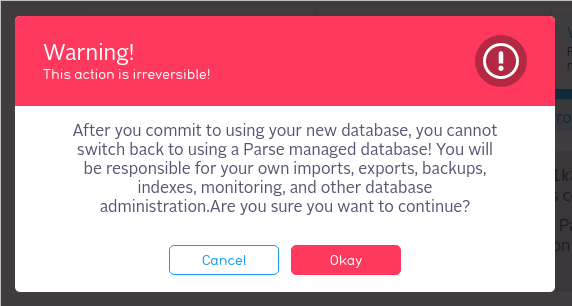 Your app should now be migrated.

This guide offers a functional starting point for migrating a Parse-hosted app to a Parse Server install on a single Ubuntu system, such as a DigitalOcean droplet. The configuration we've described should be adequate for a low-traffic app with a modest userbase. Hosting for a larger app may require multiple systems to provide redundant data storage and load balancing between API endpoints. Even small projects are likely to involve infrastructure considerations that we haven't directly addressed.

In addition to reading the official Parse Server documentation and tracking the GitHub issues for the project when troubleshooting, you may wish to explore the following topics: